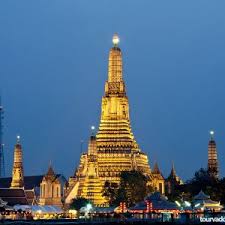 Thailand is a gorgeous country located at the centre of the Indochina peninsula in the mainland of South East Asia. The country shares borders with Laos and Cambodia in the East, Myanmar in the North, Anadman Sea in the west and with the Gulf of Thailand in the South. A mesmerizing destination, it covers an area of 513,120 sq kms.

This beautiful country is a potpourri of multiple cultures. From ascetic lifestyles of the monks to the throbbing nightlife and rave parties on the beaches, Thailand boasts of a wide spectrum of things.

The tropical beaches of Thailand attract throngs of visitors every year. You can get a tan on one of its many beaches or enjoy the many water sports available for those looking for the ultimate adrenaline rush. Also known for its massages, it may be a good idea to get a relaxing back massage from one of the masseuse by the beach.

Ornate Buddha deities and its glittering Thai temples are a major attraction here and the Wat Phra Kaew is an absolute don't miss. There are many royal palaces that one can visit in Thailand. Sprawling gardens and beautiful architecture greet you at the abode of the royalty. One can also check out the ancient ruins at places like Ayuthaya and visit one of the many tiger temples in Thailand. Thailand is also known for its street food. It offers an opportunity to bite into different kinds of delicacies at roadside restaurants. The fruit platters being sold at every nook and corner are a must have.

From high lime stone cliffs and picturesque valleys to structures sitting on extinct volcanoes to beautiful wildlife reserves, there is something for everyone in Thailand.
Thailand has an estimated population of 67,200,000 people out of which 95% are Thai citizens, 2% are Burmese and 1.3% comprise other groups. While many minority languages like Lao, Islan and Malay are spoken in different provinces, the country’s official language is Thai.

Thailand , officially the Kingdom of Thailand and formerly known as Siam, is a country at the centre of the Indochinese peninsula in Southeast Asia. With a total area of approximately 513,000 km2 (198,000 sq mi), Thailand is the world's 50th-largest country. It is the 20th-most-populous country in the world, with around 69 million people.

Thailand is a constitutional monarchy and has switched between parliamentary democracy and military junta for decades, the latest coup being in May 2014 by the National Council for Peace and Order. Its capital and most populous city is Bangkok. It is bordered to the north by Myanmar and Laos, to the east by Laos and Cambodia, to the south by the Gulf of Thailand and Malaysia, and to the west by the Andaman Sea and the southern extremity of Myanmar. Its maritime boundaries include Vietnam in the Gulf of Thailand to the southeast, and Indonesia and India on the Andaman Sea to the southwest.

The Thai economy is the world's 20th largest by gross domestic product (GDP) at PPP[expand acronym] and the 27th largest by nominal GDP. It became a newly industrialised country and a major exporter in the 1990s. Manufacturing, agriculture, and tourism are leading sectors of the economy.[13][14] Thailand is considered a middle power in the region and around the world.